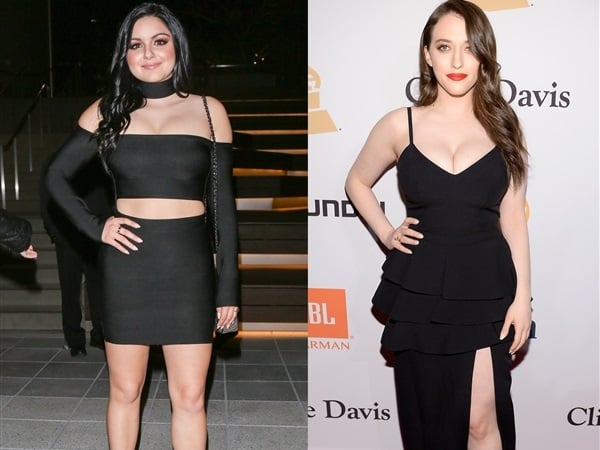 Ariel Winter and Kat Dennings are certainly kindred spirits, as not only are they both busty Jewey looking whores, but they also both star as sassed mouthed sluts on horribly unfunny network TV shows. That is why it is no surprise that each of them decided that it was a good idea to cram their bloated mammaries into tiny tight black dresses like this.

Though as you can see from Ariel’s photos above when compared to Kat’s photos below, that Kat Dennings has the more bulbous breasts. Of course that may not have been the case if Ariel Winter didn’t foolishly get her tits trimmed down by some hack surgeon because of “back pain”.

Yes even though Ariel and Kat are very similar clearly Kat is the one with more sense… and the better career prospects. For when “Modern Family” gets cancelled Ariel is going to wish that she just took some Tylenol, and left her money makers intact.