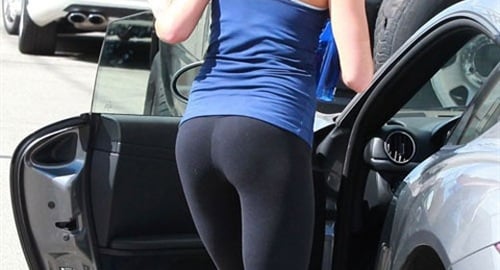 Ashley Greene has been a very busy girl. Not only is she pretending to be blatant homosexual Joe Jonas’ girlfriend for the publicity, but she has also been hitting the gym hard to plump her pancake ass (her one and only physical flaw).

As you can see in the pictures below Ashley Greene has done a good job adding some definition and thickness to her once saggy behind. However, would it kill her to not be a whore and wear a burka to the gym? Sure she would have to be mindful not to get the cloth stuck in some of the machines, but squats can be performed just as easily in a burka as in this whore outfit Ashley has on.

I applaud Ashley Greene for her efforts. Not only is she using a heathen homosexual to boost her own fame, but she is working on approving her attractiveness to virile Muslim men by firming up her ass. If she would just work on her morality and accept Allah has her lord and master then she’ll be on her way to big things. Allahu Akbar!