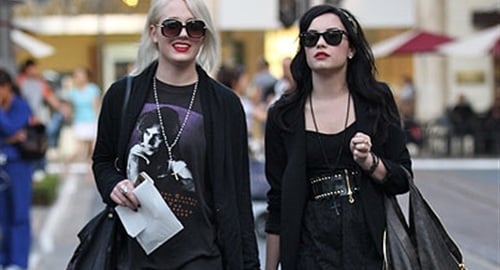 Demi Lovato has taken her breakup with her long time lesbian lover Selena Gomez particularly hard. At first she tried to get over Selena by banging whores like Miley Cyrus and Joe Jonas, but when that failed to quell her heartache she finally plunged into a deep depression.

Just look at these recent pics of Demi she has gone totally emo. She has always been on the brink of emo, but the breakup with Selena has appeared to push her over the edge.

No word yet if Demi has started cutting herself again, but based on the looks of her new dyke companion in these pics I’d say she’d have to be, because she isn’t going to get much of a release from that she-beast.

Poor Demi, Selena Gomez was probably the best piece of ass she’ll ever get and now it is over. The sooner she comes to accepting this and moving on with her life the happier she’ll be. Until then we’ve got another faggy emo teen on our hands.