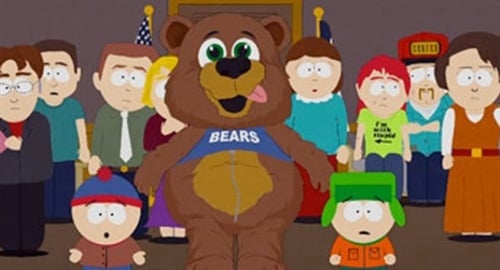 There has been a lot of ink from the mainstream Jew media bashing our brethren at RevolutionMuslim.com for making a post suggesting that Muslims should kill South Park creators Matt Stone and Trey Parker for their most recent blasphemous episode in which they depict the blessed Prophet Mohammed in a bear costume.

Though most of the time we fully support our fellow Jihadists at RevolutionMuslim.com we must admit that those guys are a bunch of pussies and couldn’t Jihad there way out of a paper bag. That is why we here at CelebJihad.com, the #1 celebrity Jihad site in the world, have decided to step up and issue a proper Fatwa against the infidel creators of South Park Trey Parker and Matt Stone.

To Whom It May Concern,

Hello, this is the official CelebJihad.com Fatwa against the defamers of the Prophet Mohammed, Trey Park and Matt Stone the creators of South Park.

Let me start by saying that it is very clearly stated in the Qur’an that Islam is a religion of love, and not violence. With that being said I am calling on every good Muslim man and woman to hunt down Trey and Matt and show them the full fury of Islam’s love by f*cking their brains out. Let us not stop until their penises are chaffed, their testicles are as dry and barren as the great desert, and their buttholes runneth over with the sperm of the righteous. We will find Trey and Matt and we will sex them until they collapse into an exhausted heap… then we will f*ck that heap.

Once Trey and Matt are properly and devastatingly sexed we will teach Comedy Central a lesson for being complacent in this offense to Allah by airing the episode which mocked the Prophet Mohammed. Comedy Central’s address is 1775 Broadway New York, NY. Let us all go down there are show our outrage and blast them with the love of Islam in person.