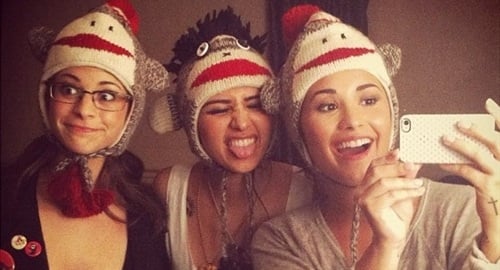 Former Disney star Demi Lovato is a hateful bigot! Just look at this photo of her wearing a racist monkey hat, openly mocking the Asian chinks and albino spooks.

Muslims are of course the most accepting, least racist people in the world. So if there is one thing we can not stand it is ignorant bigotry, especially from moronic filthy half Mexican women like Demi Lovato.

This picture sickens me, just looking at it I can hear Demi Lovato and her friends giggling while making those stupid faces and saying, “Look at us we are Asians with beady little eyes and pointy ears. We like to do math and die in tsunamis.”

Demi Lovato and her friends need to be taught the meaning of tolerance by being stoned to death for this offensive display. It is the only way these hateful dumb bitches will learn! Allahu Akbar!