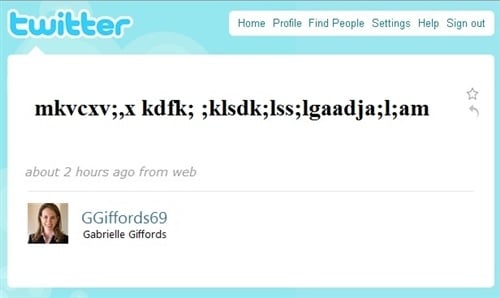 Arizona Rep. Gabrielle Giffords, who bravely got shot in the head just 2 weeks ago, took to her Twitter account to send the above heartfelt message to her supporters.

In a tweet that appears to be written by smashing her face against the keyboard, Rep. Giffords shows that she is almost back to her full mental capacity.

Notice the playful use of semicolons; it is as if Giffords is saying “wink” I’m going to be OK, and even though my insurance will not cover my physical therapy because a federal medical review board has deemed it “unnecessary” based on my age and medical history I still support Obamacare.

Of course politics being what it is this tweet isn’t without controversy. The part were Gabrielle wrote “lgaadja” is clearly plagiarized from Sarah Palin’s son Trig’s Twitter account. On a March 16th 2010 Trig tweeted, “aahnfn xcjkva ajfajklf lgaadja”. Gabrielle Giffords use of “lgaadja” appears to be mocking Trig.

We’ll see how Sarah Palin responds to this obvious dig at her family. For Gabrielle Giffords well-being let us hope she does not call for blood.