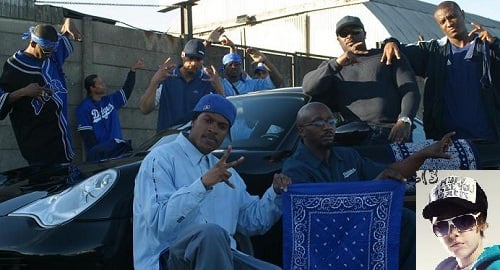 A Justin Bieber concert in Gary, Indiana, ended in a near riot on Sunday after dozens of fans attacked a group of men wearing Jonas Brothers tee-shirts. The violence comes amid mounting tensions between Bieber, a known “C Queen” (a female member of the Crips), and longtime Blood, Nick Jonas.

Prior to the concert, authorities feared violence would occur and subsequently closed the streets surrounding the Genesis Convention Center, deploying 75 police and two K-9 units to manage crowds during the performance.

Despite these measures, at least 13 people were arrested and one person was left hospitalized after being stabbed in the thigh with a meat thermometer. Various properties around the venue were vandalized following the concert.

Trouble began half-way through the performance when a group of Nick Jonas fans dressed in red began heckling Bieber. Bieber responded with a series of rude gestures before instructing the crowd to “light them slobs up.”

As the fighting broke out, Bieber yelled “C’s Up B’s Down,” before storming off stage.

Authorities are bracing for further violence as Bieber’s tour continues to East St. Louis on Tuesday.