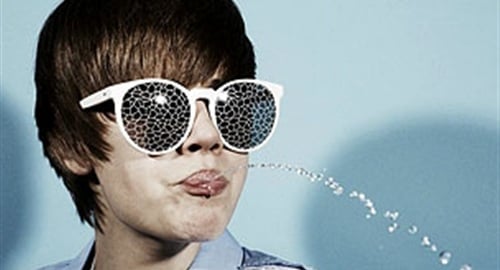 According to sources Justin Bieber spat on a homeless man last night in LA while leaving the underage gentleman’s club “Raisins”.

As Justin and his entourage were leaving the club with at least a dozen strippers, a homeless man and his 3 small children approach the pop star and asked “please sir do you have any change?” To which Justin Bieber replied “Yes I have plenty of change you homeless piece of sh*t thanks for asking.”

Justin then proceeded to clear his throat into his mouth and spit in the homeless man’s face. Justin’s crew and the strippers all had a good laugh at the humiliated father, as Justin continued to berate the man with obscenities in front of his children.

Personally I think this was totally uncalled for by Justin Bieber, but I’m sure his fans will think it is cool. Thanks to Justin’s irresponsible behavior we’ll end up having a bunch of 12 year old girls roaming the streets at night looking for vagrants to assault.