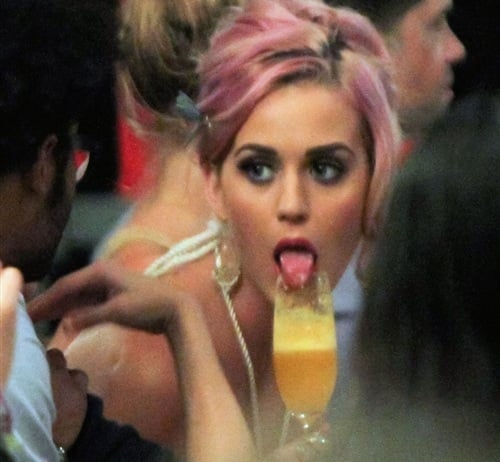 Pink haired pop star Katy Perry exhibited her horrible table manners at a 5 star restaurant in Santa Monica last night, when she began lapping up her mimosa like some sort of wild animal.

Of course Katy Perry was raised in a trailer park by meth addicted wolves, so it should come as no surprise that, though she has climbed the social ladder by prostituting her body to computer generated noise she calls “music”, she still has all the class and sophistication of a Tijuana crack whore.

This picture just goes to show that kuffar celebrity role models like Katy Perry are nothing but degenerate low life scum, who represent the lowest common denominator in society. Clearly they are bringing about the fall of Western civilization, and helping to usher in the triumphant Islamic state that will soon dominate the world. Allahu Akbar!