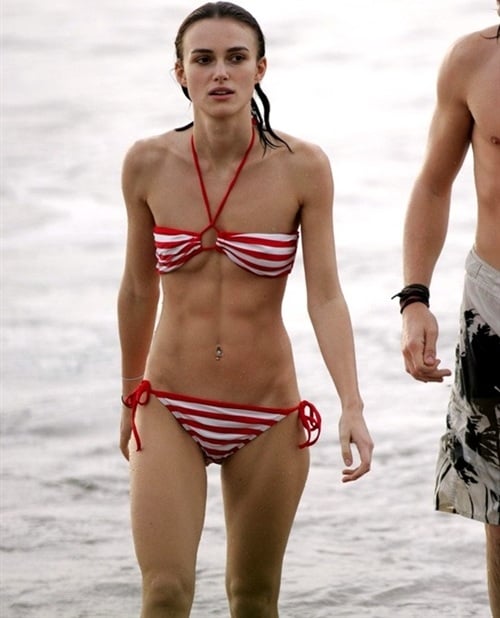 British actress Keira Knightley showed off her sexually ambiguous body in a bikini yesterday setting off a furious debate between Muslim clerics.

In one camp is the followers of cleric Anjem Mumbaddhi who, as more of a traditionalist, thinks that a fatwa should be issued against Keira Knightley calling for her stoning for brazenly showing her shameful female flesh in a bikini thus offending Allah.

However, opposed to this view are the followers of cleric Ali al-Timimadi who have taken the controversial stance that Keira Knightley’s body is totally unfeminine, so she should be allowed to show as much skin as she wants as she is practically a man and Allah would not mind seeing her nude form. Of course the Ali al-Timimadi faction still believes that Keira Knightley should be stoned, but only for having a distasteful lack of body hair and for starring in the movie “Domino”.

This debate should be a lively one once Keira Knightley is arrested and brought before a Shia court for crimes against morality. Regardless, of the ruling the outcome is not in question, so gentleman start collecting your rocks now. Allahu Akbar!