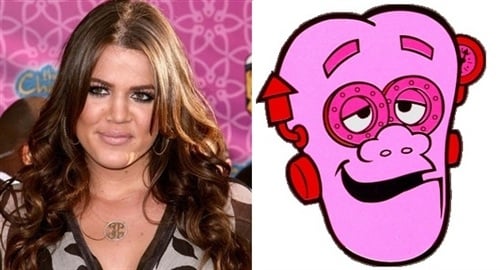 Earlier this week, 2 of Robert Kardashian’s ex-wives claimed that the she-beast known as “Khloe Karadashian” was not the deceased lawyer’s biological daughter. Khloe’s mother Kris Jenner confessed that she had an affair while married to Robert, but stubbornly refuses to admit that Khloe is not his child.

However, earlier today Khloe Kardashian’s real father came forward, and he is none other than famed cereal icon Frankenberry. Of course it is not hard to believe that Frankenberry is Khloe’s real father as they have the exact same nose, eyes, forehead, chin, and insatiable appetite for sugary breakfast cereals.

By admitting to be Khloe Kardashian’s father Frankenberry is bravely shinning a light on one of the darkest periods of his life, telling reporters, “The early 1980’s were a crazy time for me. Monster-themed breakfast cereals were the rage, essentially making me a rock star and I certainly partied like one. I was doing a lot of coke and sleeping with a different woman every night. We all were Count Chocula, Boo Berry, Fruit Brute (RIP). It was the thing to do.”

Frankenberry then went on to recount the night he slept with Khloe’s mother Kris, “To be honest with you I thought she was a man. I mean she looks like a man. I was so coked out at the time I didn’t care, I was just trying to get it in. Of course if I knew then that I was creating something that looked like Khloe I would have pulled out and finished on that bitch’s man face.”

When asked if he was looking to have a relationship with his daughter Khloe Frankenberry responded, “What the hell for? I get drunk and sleep with big ugly whores, I don’t want to be a father to one.”

There has been no response yet from the Kardashians.