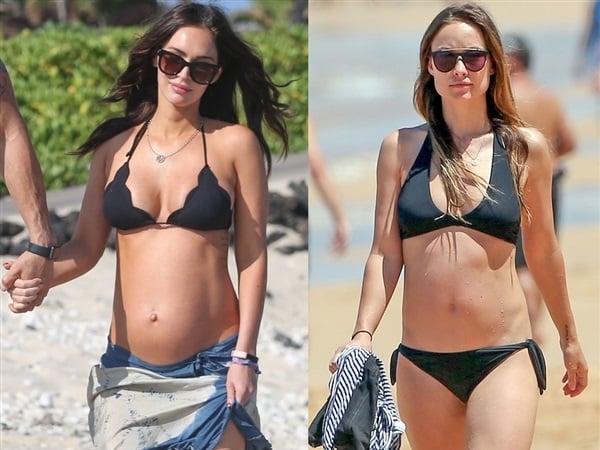 Heathen celebrity sex symbols Megan Fox and Olivia Wilde both look like fat slobs while wearing bikinis on the beach in the photos below.

Us Muslims know that most women in the US of A are morbidly obese pigs, but at least Hollywood starlets use to have halal tight bodies. However, looking at Megan Fox brazenly flaunting her beer gut in the bikini pics below, it becomes quite clear that the standard for infidel beauty has dropped even further.

Not only does Megan Fox look like a chunky monkey, but as you can see in the pics below actress Olivia Wilde also now has a grotesque protruding midsection. No doubt her and Megan have been spending their days stuffing their bloated gullets full at all you can eat buffets.

Of course Megan Fox and Olivia Wilde getting fat is symptomatic of the decline of Western civilization. Thanks to the blasphemous teachings of feminists who laud the sinful female body in all of its hideous forms, women have been given a free pass to be weak-willed slothful gluttons. You better believe that if Megan and Olivia lived in the civilized Islamic world and performed back breaking labor all day while subsisting on table scraps like our women do, they’d still have pleasingly taut and toned bodies.