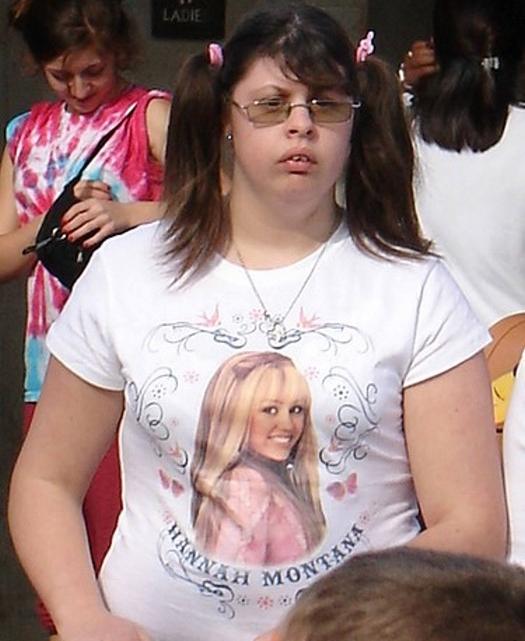 As you’ve probably guessed Betty Lou is not like most 12 year old girls. That’s right she holds 3 Guinness book of world records. One for eating the most crayons in a 12 hours span (127), then another for having the most colorful bowel movement, and finally a third for just loving Miley Cyrus so God damn much.

We wanted to get some insight into what Hannah Montana fans saw in the show, and since Betty Lou is Hannah Montana’s biggest fan we thought who better then her to answer the question, “Why Hannah Montana is so popular?”

“Well I’m glad you asked me that. To me Miley Cyrus, or Miley Stewart as she is called on the show, and Hannah Montana represent the duality of man, which is a principle made famous by the late 19th century psychiatrist Carl Jung. Of course Jung notes that polarity is often arranged in a system of four as a quaternio or quaternity, but I think if the writers tried to work that in it may go over some the younger girl’s (ages 8 and below) heads.

The Miley Stewart character represents the Apollonian ideal of the logical man. In juxtaposition Hannah Montana represents the Dionysian ideal of the artistic impulse. These two powerful forces play off each other beautifully in a modern day Birth of Tragedy that would move Nietzsche himself to tears. Really it is some of the highest form of art that has ever been created, and that is why it is so popular.

Now if you would excuse me I must go I just made poopy in my pants.”