The Islamic Ministry On Celebrity Affairs in Tehran has uncovered Miley Cyrus flashing her nipple during her recent appearance on the TV show “Saturday Night Live”.

As everyone knows, every frame of both TV and film is carefully examined by pious Muslims for acts of immorality. After careful review by a team of clerics it was determined that this is in fact Miley Cyrus’ nipple (as you can see in the enhanced freeze-framed photo below). 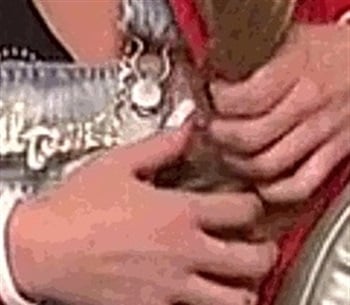 Clearly Miley Cyrus intentionally flashed her nipple on SNL to further corrupt the infidel TV viewing audience, and hasten America’s downfall. No doubt Miley’s nipple is now in the kuffar public’s subconscious mind, causing them to succumb to sinful lust at alarming rates. Islams victory is certainly at hand.