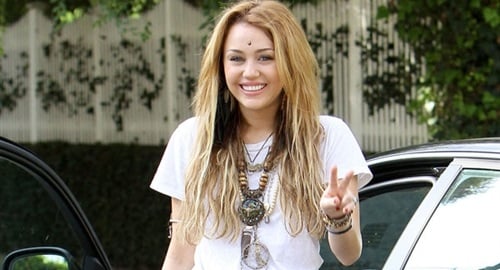 Muslim warrior Miley Cyrus continued her Jihad against the infidels by mocking the subhuman Hindus.

As you can clearly see in the photo above Miley Cyrus is laughing as she jokingly wears a “bindi” AKA the stupid dot Hindus wear on their forehead. Miley Cyrus is a proud Muslim woman so it is her duty to degrade those beneath her, and it doesn’t get much lower than filthy smelly cow worshiping Hindus.

Not only is Miley Cyrus putting Hindus in their place with this picture, but she is also showing her solidarity with her Muslim brothers and sisters in Pakistan. For years the Pakistani people have suffered by being situated next to the Hindu country of India. The stench emanating from India has caused many border wars and much pain to the Muslim people of Pakistan.

Thankfully, Allah in his infinite wisdom granted Pakistan the nuclear bomb. Soon India and Hinduism will be no more, and the world will be a better less dirty place all thanks to Miley Cyrus and Islam. Allahu Akbar!