Obama State Of The Union Speech Leaked To The Internet 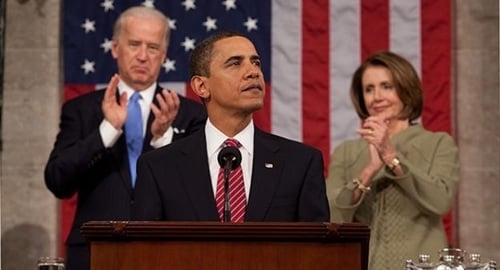 With millions of Americans still caught in the grips of a crippling recession President Barack Obama is preparing to make his 2011 “State of the Union Address” tonight. Many political pundits have speculated that Obama would focus on the economy and job creation, but CelebJihad.com has received an advanced copy of the President’s speech and it is filled with surprises.

Obama expanded his speech writing team for this year’s address picking up famed Oscars joke writer Bruce Vilanch, so not surprisingly Obama’s speech will feature quite a few pop culture references. He will open with a joke disparaging MTV’s Jersey Shore star “Snooki” for her weight and small stature (no word yet if Snooki will be in attendance at the time). Obama will then cover a few of the big celeb scandals Americans are currently dealing with, specifically the whole Charlie Sheen and his hookers thing (lets just say he has a doozy of a pun using “Two And A Half Men”)

Once America and more importantly the audience in attendance is properly warmed up, President Obama will get into the serious issues. He’ll compare America’s current economic troubles to that of Facebook founder Mark Zuckerberg’s character in “The Social Network”, and he’ll point out how Americans needs to just sit tight because “we don’t know what this thing is yet”.

President Obama will end his speech with a significant rant against the importance of birth certificates. He’ll remind Americans that they can not really be trusted and are thus not important. Obama will propose that America do away with the whole birth certificate system, and instead just take people’s word for their birthplace because “like the elders in my village use to say ‘we are all in this together’.”

Yes President Barack Obama’s 2011 State of the Union Address is going to be one for the ages. There are sure to be a lot of laughs with a few poignant moments sprinkled in. The American populace will walk away from it being thoroughly entertained.