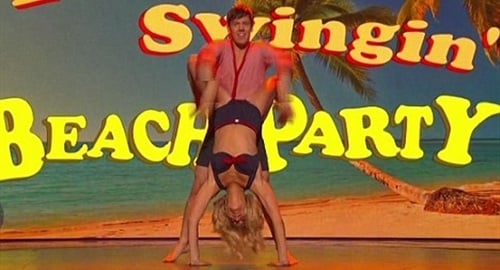 13 year old singing sensation LeAnn Rimes has certainly grown up. As you can see in the picture above LeAnn Rimes has incorporated a live sex show into her stage performances in a desperate attempt to regain her former fame. Rumors are circulating that a donkey may be added at a later date.

Clearly the Taliban showed great wisdom when they banned music. Just look how brazen these filthy Western whores like LeAnn Rimes become when they perform to their prerecorded tracks. They should be taught a lesson that true glory for women is to serve at the feet of a Muslim man!

I myself would have LeAnn Rimes in a burqa and groveling at my feet within minutes. I would speak to her of the tender mercies of Allah as I cut off her ears and nose. This alone might save LeAnn from the hellfire, but it’s hard to say for certain. After all, we know that 90% of the inhabitants of hell are women!

Sure after her holy mutilation LeAnn Rimes wouldn’t be much to look at anymore, but she would have the fear of Allah in her heart and that is what counts. Inshallah, she could still be a baby factory for me, producing a new generation of mujahideen for our grand jihad!