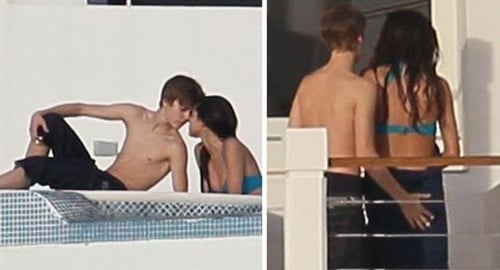 Just look at these shocking and disgusting photos of 18 year old Selena Gomez forcing herself on 16 year old Justin Bieber.

This is the epitome of what is wrong with Western society. Justin Bieber’s testicles are still up in his throat and a grown woman like Selena Gomez is allowed to finger him without repercussions and the media thinks it is “cute”. However, when a handsome Jihadists offers to buy his neighbor’s 14 year old daughter, for a very reasonable price I might add, he gets the police called on him. Where is the logic in that?

I am hopeful though that these pics of Justin Bieber and Selena Gomez snuggling and ass grabbing will once and for all bring about the end of the heathen Western culture. Once Selena Gomez fans see these pics they will rush out to find prepubescent boys like Justin Bieber to use for their sex games. This will no doubt drive these boys to homosexuality thus decreasing the population and allowing us Muslims to breed our way into the majority.