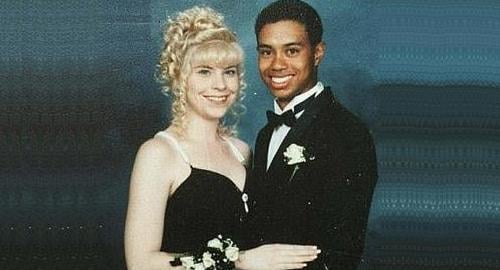 Dina Gravell, Tiger’s high school sweetheart and the woman who took Tiger Woods’ virginity describes a teenage Woods as a clingy, possessive romantic who liked to write love letters, and was not even remotely attracted to black women.

Her first date with Tiger was to see a movie, and it ended with an awkward hug.

“As we said goodbye, it was really awkward. You could tell he didn’t know whether to lunge for a kiss or not. So we had a hug instead.”

Dina speculates that her choice of movie, “Poetic Justice” with Janet Jackson, had ruined the mood for Tiger.

The relationship strained in 1994 when Woods left their town to enroll in Stanford University.

“I was never jealous but Tiger was a little. He’d ask me what I was up to when he was gone. I never cheated on him, though.

It was college. He was a golfer. I don’t flatter myself that he was faithful to me.

Tiger ended their three-year relationship in a letter.

“He said my parents are very concerned that you’re a big distraction for me, and I have to listen to them. We have to break up. I felt I was punched in the stomach.”

I think the real reason we broke up was that I was not ‘white enough’ for him. He hated the fact that I would listen to R&B music and eat fried chicken on occasion.”

Days later, Tiger tried to reconcile with her, but she refused.