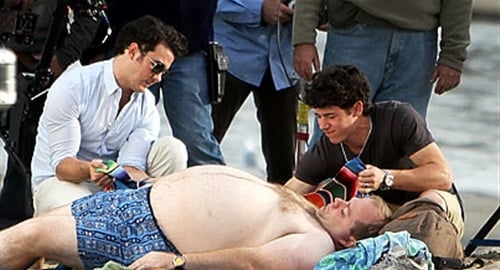 Wow just look at this picture of the Jonas Brothers attacking a fat man on the beach. These little punks think that because they are celebrities they can do whatever they want.

From what I can gather from this picture Jonas Brothers, Nick and older brother Ugly Jonas were walking down the beach when their Satanic urges got the better of them. It appears that as their devil worshiping friends cheered them on they attacked and killed a helpless fat man.

They then proceed to either molest the man’s dead body to get their sick perverted Jonas brothers kicks and/or they started harvesting the man’s organs to be sacrificed to Lucifer later that night.

Why haven’t the authorities arrested these sadistic freaks? I’ll tell you why, it is because they are protected by the Zionist scum in Hollywood. May Allah the righteous strike them down and bring an end to this terror that is gripping our nation’s fat men at beaches!