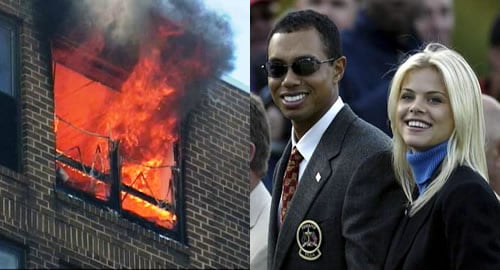 Elin Nordegren, the wife of professional golf sensation Tiger Woods, is being hailed as a hero today after using a golf club to rescue a group of third graders who were trapped in a burning building. On Friday, Nordegren used the same golf club to free her husband from the wreckage of a car accident, making this her second golf-club related rescue in less than a week.

The children involved in the incident were on a field trip to a hog-rendering plant directly across the street from Woods and Nordegren’s home. The students and their chaperon became trapped when an electrical fire broke out, blocking the only exit. The children tried in vain to escape through a window, only to find that it had been painted shut. Luckily, Nordegren happened upon the scene with her golf club and smashed the window open. She then continued on, smashing every window within a three block radius, just to be sure.

Firefighters on the scene say that if Nordegren had not been in the area with the golf club, the children would have surely died.

“A lot of lives were saved by that brave woman and her trusty golf club,” said firefighter Joe Elipani. “She was so focused, so determined when she broke that window. If I didn’t know any better I’d say she was deranged.”

Although she was not available for comment, sources close to Nordegren say she is exploring other ways in which she can save lives, including the possibility of using her golf club to screen Rachel Uchitel for brain tumors.